"So many of our reporters cut their teeth on American gun violence," said an angry CNN V.P. "How the hell are we supposed to fill air time??" 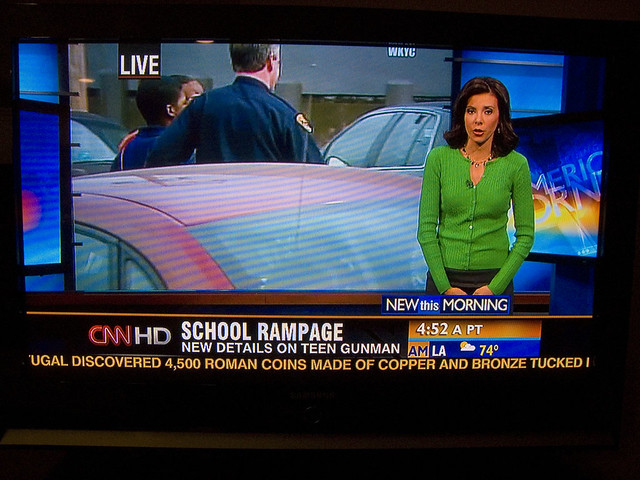 MONG THE strongest reactions against President Obama's executive order to close loopholes that allow gun purchasers to bypass background checks came from the U.S. bureau of CNN, whose North American news cycle is filled to the brim with coverage of gun violence around the U.S.

Ken Jautz, Executive Vice President of CNN/U.S., wasted no time in criticizing the President for what he called "Obama's CNN job-killing measures."

Mr. Jautz seemed incredulous that Mr. Obama "would endanger the careers of some of our best anchors and photographers" by closing loopholes that contribute to the nonstop mass shootings in the United States.

"So many of our reporters cut their teeth on American gun violence," said the angry CNN Veep. "How the hell are we supposed to fill air time?? Has Obama even thought this through?!”

Obama's new executive action is estimated to save thousands of American lives each year, a number Mr. Jautz said "translates into hundreds of jobs lost at CNN. Some of our best people have never covered anything but mass shootings. They can't just start reporting on other things overnight, you know."

The Executive Veep said CNN would, "as a result of Obama's reckless tactics" need to invest heavily in "bigger and better drones" to scour the American landscape "for every natural disaster we can find," as well as police car pursuits, Black Friday stampedes, and sinkholes.

"We'll also need to expand our coverage of Donald Trump, child abductions, Bill Cosby allegations, and, frankly, make inroads into what would normally be covered at the local level. Home invasions, bank robberies, rush-hour traffic cams, that sort of thing," said Jautz. "So, really, Obama is threatening reporters at the local level, too. I don't know how he sleeps at night."

The V.P. added that, if all else failed, "and there just isn’t anything CNN-worthy to fill air time as beautifully as mass shootings once did," the network would "be forced to rely on its traditional fallback," the shark attack.

Said Jautz, "We've got to keep our fingers crossed for a banner year of blood and guts on U.S. beaches. And there's no one to blame for that but Obama."